The following versions of Internet Explorer have been tested and are affected by this issue: 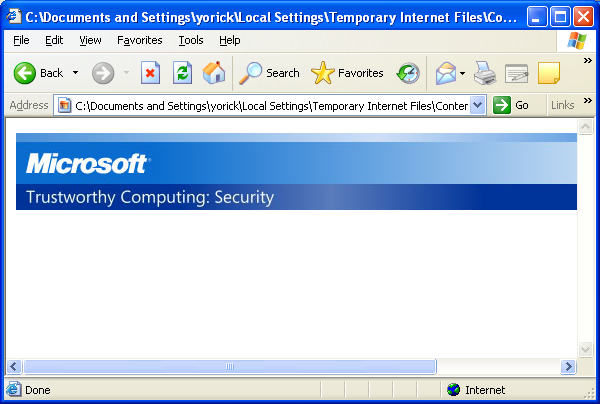 It has been discovered that it is possible to load arbitrary files from the Temporary Internet Files folder by creating a filename containing a hash (#) character. For example, we can set the following Content-Disposition HTTP header:

Tests have revealed that using the Content-disposition HTTP header only allows us to supply a hash character in a file name. If we set other special characters in the filename, such as the question mark (?), Internet Explorer does not allow drag and drop actions on the image.

Further testing has shown that Internet Explorer does allow dragging and dropping of files containing the percent character (%). This allows us to encode special characters, using URL encoding, in links. For example, we can create the following link:

A proof of concept has been created that demonstrates this issue. Click on the link below to start the proof of concept. Drag the image in the search pane into the right window to load an arbitrary file from the Temporary Internet Files folder.