A flaw has been discovered in the way Internet Explorer handles redirects. Using this flaw, it is possible to read the content of arbitrary web pages and/or arbitrary files. This issue can be triggered using a page that will redirect to itself the first time it is loaded. The second time this page is loaded, through the redirect, this page redirects to a different page. In this case, Internet Explorer will return the content of the new page as if it were the content of the page that performs the redirect. Using the XmlHttpRequest object, it is possible to read this content.

This issue has been tested using the following versions of Internet Explorer:

All versions have been found to be affected by this issue. However, Internet Explorer 7 is only affected when this issue is exploited from the "Intranet" security zone.

Some restrictions in Internet Explorer prevent an attacker from retrieving certain files. The most important restriction is caused by the security zones in Internet Explorer. A site running in a lower security zone (i.e. the Internet zone) is not allowed to read the content of a site running in a higher security zone (i.e. intranet zone). Also, the XmlHttpRequest does not properly process binary files. Consequently, when a binary file is loaded, it will be processed until the first NULL byte. The remainder of the file will be ignored.

A flaw has been discovered in the way Internet Explorer handles redirects. Using this flaw, an attacker can cause a different content to be loaded for the page that performed the redirect. This redirect has to occur in two steps. The first time a page is loaded, it should perform a redirect to itself. One way of achieving this is by returning the following HTML:

If the page reloads and this page redirects a second time, but to a different page, Internet Explorer will redirect to this other page. The content of this page is displayed by Internet Explorer. This redirect should be performed using the HTTP Location header. For example:

When displaying the content of the redirect, Internet Explorer fails to update its address bar. At first, this appears to be a useless "address bar spoofing flaw", the same thing can be achieved using a frameset. Figure 1 shows this issue using a redirect to Google. 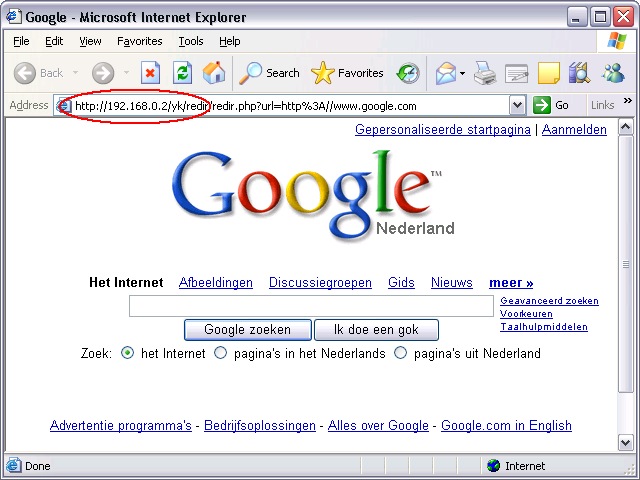 Because of this, it is more difficult for an attacker to hide the attack. Also, the attack may be prevented by certain pop-up blocker applications.

In order to read arbitrary local files one of the following conditions have to be met:

* The attack is performed from within the local network.
* A flaw in Internet Explorer allows an attacker to elevate a site running in the Internet zone to the intranet zone.
* The attacker is aware of a vulnerability in an intranet site, uses the target user as an intermediate to exploit this vulnerability, exploiting the redirect flaw.

Internet Explorer fails to correctly handle redirects, allowing an attacker to read arbitrary content from arbitrary websites (including intranet portals). Under certain conditions, it is even possible to obtain local files with the privileges of the target user.