Under certain conditions when a user tries to run a modified signed executable, Windows produces an incorrect signing message. It will state that the digital signature is correct while this is not the case. This may convince users into running (potentially) unsafe executables.

This issue has been addressed in Service Pack 3 for Windows XP.

Microsoft Authenticode is a technology that can be used to sign various file formats, such as .exe, .ocx, .dll & .cab files. Signed files are used to prove the authenticity & integrity of these files. It tells users who (which vendor) has created (or actually signed) the file and it tells users if the file was modified afterwards or not. It does not guarantee that the file is safe to run or use.

With Authenticode, it is still the responsibility of the end user to verify whether the digital signature is correct. If the file was modified, it is still possible to execute the file. Windows will not produce any error message to tell the user that a file was modified. This with the exception of files obtained from the Internet. In this case users can still choose to execute the file.

To test the issue described in this documented, a modified version of the WgaTray.exe executable was used. WgaTray.exe is a signed executable, signed by Microsoft. The file was modified in such a way that it shows a message box when it is executed. Because of this modification, the digital signature will be incorrect. Figure 1 shows an example of a message that is shown when a user verifies the signature of a modified executable. A message of a correct signature can be found in figure 2. 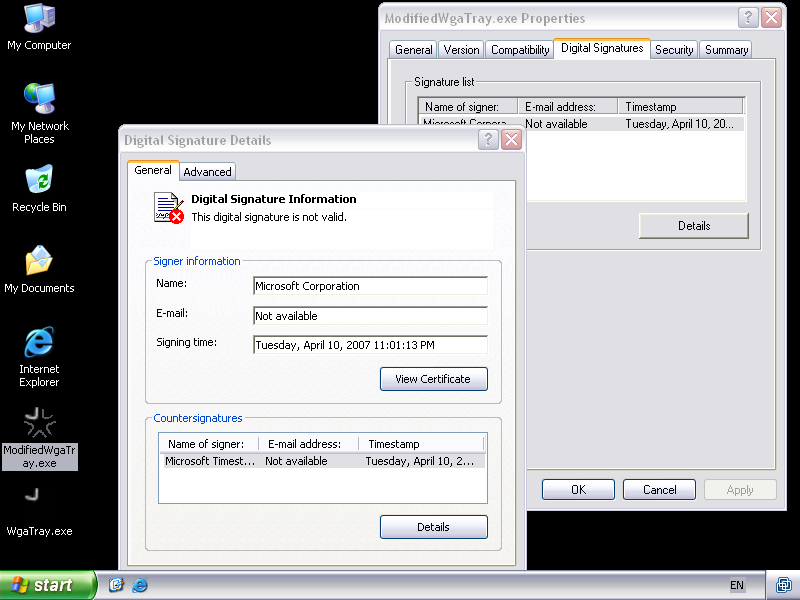 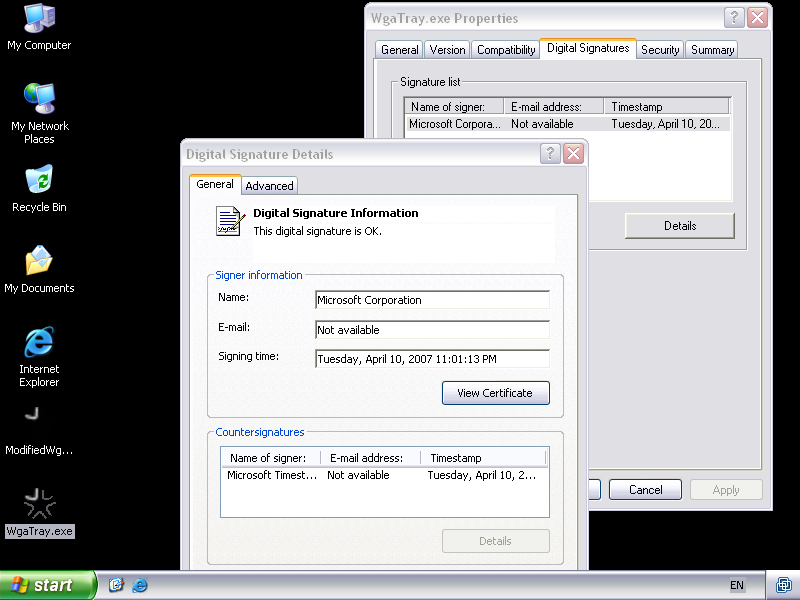 Running from the web

In case the signature appears to be incorrect, Internet Explorer will refuse to run the executable. Instead it will show a message similar as the one shown in figure 4.

If a user chooses to save an executable rather than running it directly, extra data is added to this file. Specifically, the security zone from which the file is downloaded is stored within an alternate data stream named Zone.Identifier. If the user executes a file, Windows will search for this alternate data stream and, if it exists, Windows will issue a similar warning as shown in figures 3 & 4.

The same behaviour is seen when a tampered signed executable is started from a Windows share. In this case Windows produces the same security warning, even if the alternate data stream does not exists.